DrugTestNetwork’s platform is integrated with Quest to place eOrders [online].  You can find the closest clinic to your location or the closet clinic to the employee: order a drug test, alcohol test and physical.  Over 10,000 Quest affiliated clinics are updated weekly.

Find the closest clinics and review the services they provide and print an Order Authorization you can give the employee; hard-copy and/or email. The clinic can use the printed or electronic document to conveniently bring up the order, confirm, perform the services and submit the collected sample.  LabCorp and CRL are the next labs planned for integration. 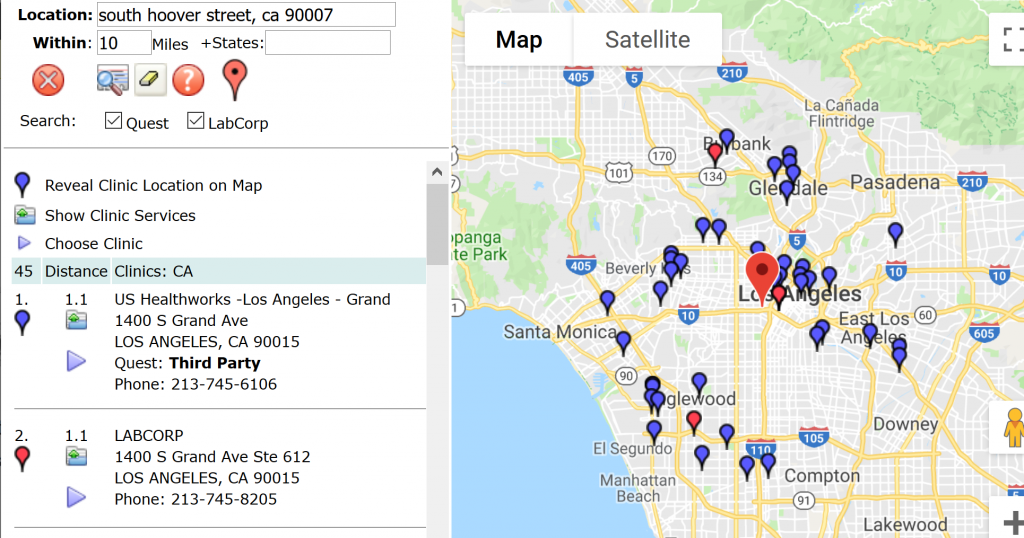 We’ve made changes to how we report some items for Medox EDI.

DTNet now takes some T values and reports them in the Lab Notes.

NOTE: Some T segment values are used to set flags in the DTNet result record; If Dilute is detected in these T segments, the boolean value for “Dilute” is set in the report record for the test.  Adulterated tests are monitored in a similar manner as well.  Medtox reports dilute, adulterated and substituted in multiple ways within a single report and DTNet monitors all the different ways to insure the status is not overlooked.

Previously, DTNet did not include lab comments in the Lab Notes section of the report record.  Lab Comments are provided through the “C” segment of their proprietary format.  The comments have always been preserved in the EDI Data component of the report record but not specifically in “Lab Notes” included on the standard report.

All C segments are now reported in Lab Notes and appear on the customer copy of the report along with the T segments outlined above.

We’ve made changes to how we report some items for Quest EDI.

Quest provides EDI as an HL7 report.  The OBX segment in the HL7 data file reports substances and their results.  Technically the OBX is referred to as the “Observation Segment.” Some Quest OBX segments report values for items such as Hair Source, Specimen information, Patient Phone Number, etc.

Some of these Observed values do not fit into the standard reporting paradigm for substances; some observed values report qualitative results Negative or Positive and OBX segments report quantitative, or numeric values for levels of the drug that was detected.

DTNet now takes some OBX values and reports them in the Lab Notes.

The observations noted above will report in the Lab Notes section of the data record as:
HAIR SOURCE: HEAD
SPECIMEN SUBMITTED: HAIR RECD ON URINE CCF
TEST(S) ORDERED: VERIFY ACCOUNT AND PANEL TO RUN

The personnel data entry module has been reorganized; input has been economized so the screen is visually easy to navigate, the essential data elements are highlighted and the different data sections are easily identified.  DTNet’s employee/patient records provide a lot of information, however, not every subscriber needs to keep track of it all.  The data entry fields have been grouped together into logical sections and each section can be easily opened when the user needs to manage those components.

Javascript, HTML5 and JQuery technologies were leveraged to provide a richer data entry experience for the user. 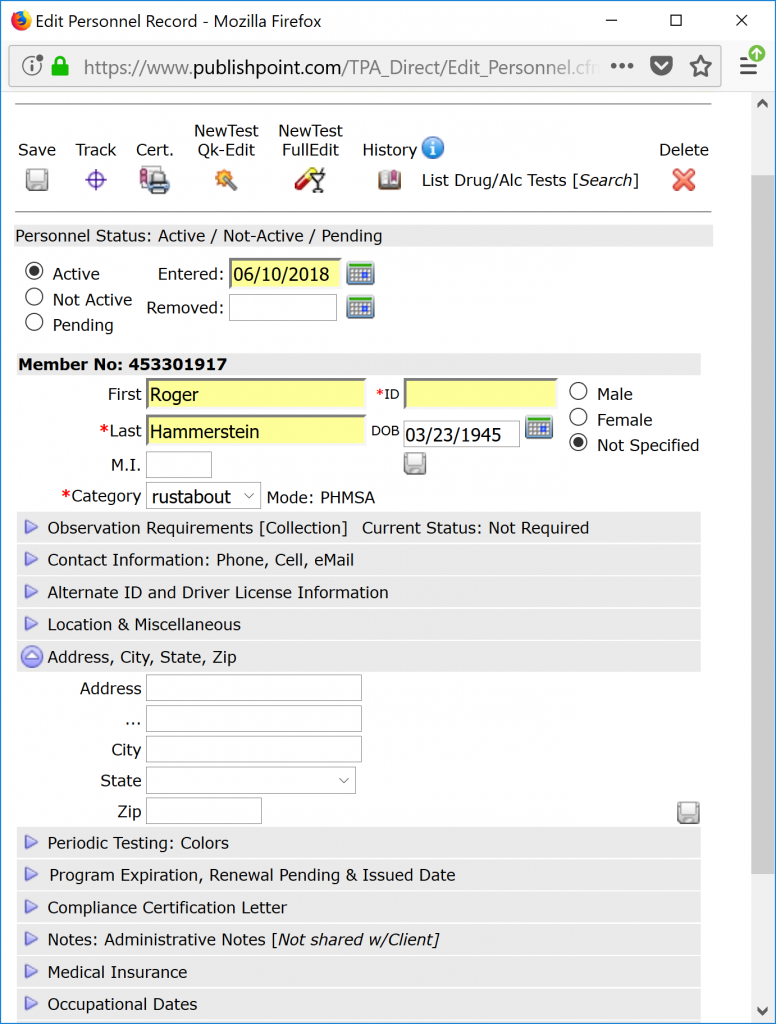 The DOT (U.S. Department of Transportation) added four substances and removed one from the drug testing panel. It expanded the panel to include four “semi-synthetic” opioid drugs (hydrocodone, hydromorphone, oxycodone and oxymorphone) and removed methylenedioxyamphetamine (MDA).  The changes to the DOT rules take effect on January 1, 2018.

If, however, one or both are specifically detected, the lab may report, for example:

Note: When subscribers get results via EDI (Electronic Data Interchange) and the results for Hydrocodone/Hydromorphone, or Codeine/Morphine, or Oxycodone/Oxymorphone are Negative, the lab may report it as a single item.  This will not cause any reporting issues relative to the DOT MIS report as the DOT MIS report modules manages it without a problem.

If you are manually managing results, the Federal Drug Panel should include each drug separately:

The DOT report generator will count each positive according to the requirements when the individual items are classified as Amphetamines or Opiates.

DrugTestNetwork, the web-based software application, and RandomWare desktop software (http://RandomWare.com) both automatically generate a DOT MIS Report for every Mode/Category represented by all employees tested.  The number of employees represented in each category is defined by the average number of employees included in each random selection conducted for the pool.  To calculate those averages, each of the software applications review the audit trails for all the random selections conducted for the period requested for the report.

Below is the list of covered-employee categories for the DOT Modes of Transportation [FMCSA, FAA, PHMSA, FRA, USCG, and FTA] reported for random testing of drugs and alcohol (all other “reasons for testing” are covered in the DOT MIS Report as well):

How it works:
Practice Fusion [PF] provides a desktop application which acts as the interface to the subscribers database.  When the reference lab, as a DTNet subscriber,  completes a test result,  the application can export the result to an HL7 data file.  When the HL7 file is saved to the PF input folder, the PF application pushes it directly to the PF platform.  In the current configuration PF only accepts HL7 files that contain a single test result which necessitates the DTNet subscriber to save multiple exported files to their local area network.

About LabTrak:
LabTrak was developed by JRB Medical Associates, Inc.  It is a laboratory information system offered to medical professionals for the management of patient diagnostics information. The systems are designed for the average physician’s office, pain management clinics, specialty labs and in-house laboratories. It is compliant with CLIA, HIPAA, and all other regulations regarding patient records.

Their lab information system is proprietary software that works with up to four laboratory analyzers at a time and allows medical offices and specialty labs to track and manage diagnostic results with ease.

DrugTestNetwork’s online application software for drug and alcohol testing data management and random selection has easy to use import features to manage the upkeep of employer personnel rosters.

One of the biggest challenges faced by TPAs is keeping employee rosters up-to-date for the random selection of personnel for drug and alcohol testing.  Importing data is an easy task with resources that read Excel spreadsheets saved as “tab delimited” text files.

Employers often have the capability to review their active personnel/employee lists in an Excel spreadsheet.  From there it’s easy to modify the spreadsheet to import the data into the Employer’s account.  The system has the capability to import far more than simply an employee’s first name, last name and employee ID whether it is a Social Security Number or other proprietary employment ID, however, this article will limit the discussion to a subset of the possible fields for import. END_OF_DOCUMENT_TOKEN_TO_BE_REPLACED

When you generate a random selection for drug and alcohol testing, the online software application, DrugTestNetwork, a cloud based SaaS system, maintains a thorough and complete audit trail.

The original list of employees eligible for random drug and alcohol testing from which the randomization was conducted is saved as a permanent record.  If John Doe was in the list at the time the random selection was conducted, his name will appear in the audit trail record.  If John Doe is removed from the personnel roster for the company in which he was employed, his name is forever maintained in the audit record.

A safety sensitive employee who must comply with Federal DOT guidelines must have passed a pre-employment drug test prior to his or her employment and must be eligible for random drug and alcohol testing from that point forward.  Therefore, one of the most frequently asked questions regarding random selection for drug and alcohol testing is whether an employee was in the list at the time a particular randomization was generated regardless if the employee is currently in the client’s pool of personnel eligible for selection.

In the application the user clicks the personnel icon (seen on the right) to review the list of employees eligible for each random selection in the report. 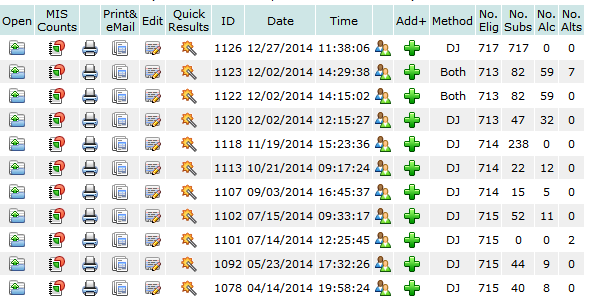 DrugTestNetwork produces the DOT MIS report with ease and has an analytical reporting tool to clarify any potential problems regarding the reporting accuracy of test results for a client.

Only Drug and Alcohol Tests for specific reasons for testing and specific overall qualitative results are counted for the DOT MIS report.  Only test results recorded with be below listed Reasons for Testing are counted:

If a test result is recorded with ANY OTHER reason for testing, it is NOT counted in the reported tests for the DOT MIS Report.

Test Result Codes: Only the Overall Qualitative Test Results listed below are counted in the DOT MIS Report:

Test Results that use ANY OTHER overall qualitative test result are NOT Included in the reported test counts for the DOT MIS Report.